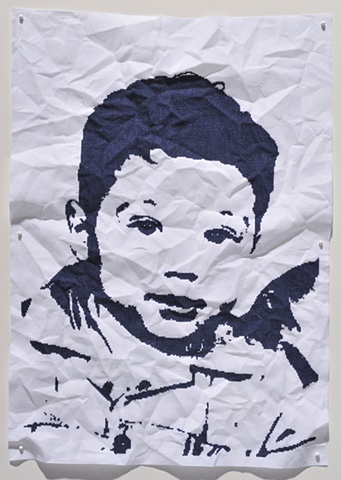 On the afternoon of Saturday, September 19, 1970 my three-year old brother, Owen, was struck by a car and killed in front of our house. Apart from the driver, I was the only witness to his death. I was five years old.

Since Owen’s death more that forty years ago certain objects associated with him have taken on an iconic status in my family; a wooden toy, a small tweed cap, a tiny pair of baby shoes but most particularly a photograph; the photograph my mother included in Christmas cards mailed the same year he died; the photograph that was trimmed with tinsel and given pride of place on the Christmas tree each year; the photograph my parents always held in family snapshots; the photograph my siblings prominently display in their homes and that sits on my shelf.

November 14, 2006 would have been Owen’s 40th birthday. To honour his memory and to celebrate what is a milestone in everyone’s life my gift to my brother is belated, a series of portraits based on this iconic family photograph.

collection of the Ottawa Art Gallery